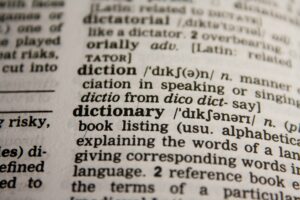 A dictionary reports equivalencies. A “racial equity glossary” dictates them.

“When I use a word,” Humpty Dumpty said in rather a scornful tone, “it means just what I choose it to mean—neither more nor less.”

“The question is,” said Alice, “whether you can make words mean so many different things.”

“The question is,” said Humpty Dumpty, “which is to be master—that’s all.”

From Lewis Carroll’s “Through the Looking-Glass, and What Alice Found There” (1871)

Recently,  OpportunityNow, a San Jose-based website/resource for entrepreneurs, invited me to comment on the City of San Jose’s Racial Equity Glossary.

Here’s what I sent them:

The first thing you should know is that this isn’t, strictly speaking, a glossary, which, like a dictionary, reports equivalencies between terms and their definitions.  Racial equity glossaries dictate usage, assigning new and specialized meanings.

Second, this is just one of a multitude of such efforts.  Diversity/inclusion is a huge business.  The phrase “racial equity glossaries” gets over six million hits.  There are thousands of glossaries, issued by governmental agencies, corporations, educational institutions, and countless websites and online organizations devoted to the project.

The SJ glossary has 17 entries; the W.K. Kellogg ”Equity Resource Guide,” a source for the SJ document, has 24.  The other glossaries I looked at share some terms, but by no means all.  It’s a quasi-discipline in which practitioners appear to make it up as they go along.

“A shared vocabulary helps foster a shared understanding,” proclaims the SJ Glossary.  Well, yes, we should try to agree on the meanings of words…but we should also ask if the purpose of a common vocabulary is to get us to think in the same way.

I think the answer here is yes.  The context for the intended understanding of the entries is a number of underlying assumptions and a particular world-view, taken for granted and never questioned. To wit:

The assumption of reparative justices

(1) The idea of compensating people for the past sins of others by bestowing unearned advantages and thus punishing individuals today because of qualities (race, gender, etc.) they cannot control is, at best, Biblical, at worst, reprehensible.  Yet this is the intellectual framework that underlies many of the Glossary entries.

The central notion of “equity” – engineered equality — entails a barely hidden coercive element.  “’Equity’ is “fairness and justice…designed to address the distinct challenges of non-dominant social groups, with an eye [i.e., ‘with a relentless commitment’ – AMP] to equitable outcomes.”

Race and gender above all

(2) A second premise: One’s worth is entirely determined by skin color and/or ethnicity, both sloppily defined but always designed to exclude heterosexual males descended from European cultures.

Thus, in a classically Orwellian twist, “diversity” (of appearance) = “uniformity” (of thought).  And “inclusion” (of everybody but white males) = “exclusion” (of white males).

This underlying philosophy is profoundly anti-humanistic.  It completely dismisses the roles of the individual’s intelligence (and there are various kinds); personality; character; creativity; response to circumstance; personal liberty, choices, and responsibility; and, yes, luck.

You are your skin color and (proclaimed) gender

Any self-respecting human being would consider repellent the idea that we are nothing more than our surname, our skin color, and all the injustices we’ve suffered.  As Bumblin’ Biden’s latest flack took the podium, the first words out of her mouth bragged about her gender and sexuality.

The new Press Secretary should get up there and tell them how she’s going to relate to them and do the job.  But color and gender are all these people care about.  It’s pathetic and scary.

(3) Magical influence is attributed to impersonal forces, rather than to documented decisions by individuals at particular times and places.

“Systematic racism” is a convenient label for unequal outcomes due to a variety of factors.  Where exactly is it?  Where’s the Bureau of Systemic Racism?  Show me examples of the practice, not the supposed results.  The Glossary itself admits that “structural racism may be difficult to locate in an institution because it involves the reinforcing efforts of multiple institutions and cultural norms.”  Say what?

“White privilege” is another example.  Again, no one is denying the disparities, but to attribute so many of them to a sinister invisible force, which originates in skin color and invariably overrides the qualities and circumstances of individuals, is irrational, magical thinking that is a fertile ground for vengeful, reparative “anti-racism” — not at all good for the society as a whole.

These mysterious forces are central to the imaginary intellectual architecture of Critical Race Theory.

(4) Also underlying the Glossary entries is an exquisite concern with subjective feelings, coupled with an assumption of mind-reading.  We are advised to avoid “micro-aggressions,” i.e., slights or snubs “whether intentional or unintentional [emphasis mine]), against “marginalized” groups (who exactly are they?).

But this ignores the complex interaction of intention and interpretation that flows through our discourse. Offense may exist only in the mind of the offended.

Who knows what was actually intended or what goes on in the mind of the hearer/reader?  That’s why our conversation is full of meaning-managing expressions like You don’t understand. What I meant was….

Similarly, just as “micro-aggressions” can be unintentional, the definition of “implicit bias” is “negative associations that people unknowingly hold.”  So now you can read my mind and know if I’m guilty of unconscious thought-crimes!

(5) Finally, the underlying ideology erodes meritocracy, as has been obvious for some time now.  This is why socialism fails: over and over, it promotes loyal, mediocre ideologues (and in the US today, people of the right color and gender[s]).

These people can’t do or run anything, so eventually the society implodes and the economy crashes.

So “inclusion” seeks to bring into positions of power and policy-making “traditionally excluded individuals and/or groups.”  No reference to competence.

The diversity industry, as I learned anew from writing this piece, is a juggernaut, bent on programming every man, woman and child in this great land.

Among the many resources listed by the W.K. Kellogg Foundation is a “White Men as Diversity Partners” website and Oregon-based organization that conducts 3½ -day “residential experiences” ($2700 for the learning lab and $1400 for housing and materials).  Any similarity to Maoist reeducation camps is purely coincidental.

The underlying assumptions of the SJ Glossary are additional evidence of an ongoing language transformation program, by which the far left/woke folks think they can effect thought and behavior change.

The requirements and restrictions keep multiplying.  We must not micro-aggress (the people who do it probably don’t care; that’s why they do it)…and refrain from calling people “looters” (that’s racist)…and use the correct pronouns (everybody has a preferred set)…and pretend that we don’t know what “a woman” is…and on and on.

I urge readers not to underestimate the pervasiveness and tenacity of these true believers.  Read their glossaries and propaganda if you must, but always with an awareness of their underlying world-view and agenda.