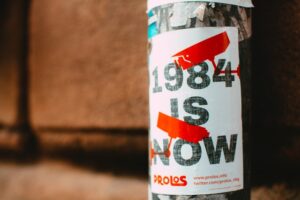 An accurate and timely message: Many of the political language abuses that George Orwell so accurately described turn out to have been accurate predictions as well.

Not merely the validity of experience, but the very existence of external reality was tacitly denied by their philosophy. The heresy of heresies was common sense.

It was one of those moments when history, perhaps time itself, stopped for a beat, as the recent Supreme Court nominee pondered the meaning of the word “woman.”  It was a politically-motivated “gotcha” question, having no other relevance to the proceedings.  This is no doubt the only time it has been asked in the entire history of Supreme Court nominations.

And it had the desired effect.

Her frozen grin and deer-in-the-headlights look, however brief, were evident for everyone to see, as the synapses and neurons in her brain flashed, crackled, and clashed.

Should she give the commonsense answer: a woman is an adult female human being having two X chromosomes and many obvious and not-so-obvious differences with men.  There are only two sexes in the real, physical world, Senator, and can we move on from this inane question?

But it wasn’t inane.

Not in 2022, when the language police work day and night to eliminate gender differences.  In 2022, woman has been dubbed a loaded word.  This is the latest evidence of divisive liberal groupthink, but no other linguist will call it out, so once again, guys, I’ll have to do your work for you (talking to you, Lakoff, McWhorter, Chomsky).

I really don’t know the root cause, to use a liberal buzzword, of this desire to blur and multiply genders.  But let’s start by distinguishing the empirical/objective from the subjective/imaginary.

There’s an analogy with medicine.

Western scientific medicine works with entities it can perceive, from physically observable bodily ailments, all the way down to body chemistry, the internal manufacture of countless regulatory substances and hormones, further down to the chemical interactions of drugs with the body at the molecular level.  At every level, there are things we can detect with our sensory organs or our instruments.

Compare these to some of the concepts of Eastern and traditional Indian medicine.  You will find no empirical evidence of meridians, qi, chakras, doshas or subtle energies so subtle that they cannot be detected by any of our instruments.  In linguistics, the same applies to deep structures and transformations.

…there is what’s physically there, which cannot be modified except by radical medical intervention.  Maybe on some other planet, they have three or four sets of genitalia, but not on this one.  Everything else is like chakras: I can show you arty pictures of them, but that doesn’t mean they’re there.

Liberal language manipulation is a snake that eats itself.

Your ideology clashes with itself. If you create ambiguity around who is a woman, and you get to the point where ideology demands that you not define “woman”…what about all the laws, regulations, and the like, protecting women or benefiting them in other ways?  Can I claim special treatment as a woman-owned business because I just decided I’m a woman?

Liberals are undermining the gains they’ve worked so hard to achieve.

If I had to guess, I would say that the blurring and multiplying of genders (allowing for a small number of medically-justified cases) is one part “it’s-our-turn-now” revenge against men (who are really not doing all that well these days)…

…one part exhibitionistic “I’m so special” (doesn’t anybody think sexuality is a private matter that doesn’t need to be shoved in our faces 24/7?)…

…and here’s the really sinister part:  the desire to bring children under state control…because maybe if you can manipulate and render ambiguous the way people think about themselves, by the skillful and wily use and prohibition of language…well, maybe they’re easier to confuse and control.

It’s about power and control

Follow it far enough and everything leads to the human need for power and control, typically by controlling thought and language, questioning basic concepts, and eliminating certain lines of thinking.  That’s what’s happening today.

This is one more call to stop using language to influence and divide people (“Say X and I’ll be offended and maybe cancel you and bring legal action”).

For if we cannot get beyond chronic language strife, beyond endlessly-proliferated perceived offenses, beyond oppressed and oppressor, beyond insisting that others use our pronouns…we are done as a society.

Ms. Jackson, you are being ridiculous.  You know damn well what a woman is.   Your liberal language bias was nauseatingly obvious.  I most certainly do not want a Supreme Court Justice who is so politically doctrinaire that she cannot define “woman.”

The nomination process should be immediately terminated and the candidate declared unqualified.