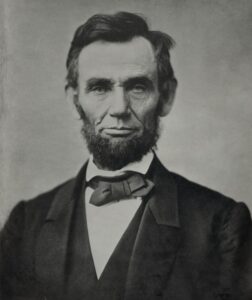 On Jan. 27, 1838, Abraham Lincoln spoke before the Young Men’s Lyceum of Springfield, Illinois, about “the perpetuation of our political institutions.” During that address, he said:

“At what point then is the approach of danger to be expected? I answer, if it ever reach us, it must spring up amongst us. It cannot come from abroad. If destruction be our lot, we must ourselves be its author and finisher. As a nation of freemen, we must live through all time, or die by suicide.”

Lincoln’s message: no other nation is strong enough to destroy America.  We would do it to ourselves.  And it’s happening.

As I write this on 1/7/2021, the Capitol has been breached by armed protestors.  This, and the political violence of 2020, is the result of a long-held, deeply rooted mass delusion of either/or, zero-sum thinking.  I suspect that leaders of both sides know it, but they insist on throwing gasoline on the fire.

There are two competing accounts of American history, and both are correct.   In the terminology of general semantics, they are two different “maps” of the same “territory,” like the Monadnock region and the Seacoast.  Very different, but still New Hampshire.

Some of America’s wealth was indeed built on slave labor (and, just as important, on economic freedom and technological innovation), followed by an equally loathsome period of discrimination and apartheid.  And it is true that the native population was treated abominably.  But it is important to note that displacing/exterminating the natives (Genghis Khan killed millions) and using slave labor were the way of the world for millennia.

How about some context here?  The West was just emerging from them, by different processes in the US and Britain.  What people on the face of the earth has not at some time displaced or exterminated the natives (the fifth book of the Bible, Deuteronomy, gives instructions for ethnic cleansing) and/or tolerated slavery (Deuteronomy again)?

Even today, some 40 million people are enslaved.

The other narrative is also true.  The combination of natural boundaries, abundant resources, and a radical experiment in liberty created one of the freest societies in history, governed of, by, and for the people, and it has brought wealth to countless millions.

You can argue – and I do – with the morality of capitalism, consumer culture, and soulless white-collar jobs.  But how many people are struggling to get into Russia or China?

I have never seen both narratives given equal space and dispassionate treatment in the same place or by the same person.  But those are the facts.  (Literary note: In H.G. Wells’ The Time Machine, the traveler goes an unimaginable 800,000 years into the future and finds a world populated by the super-effete, elite Eloi and the surly, crummy, subterranean Morlocks.  After 800,000 years,. humanity still hasn’t gotten over this basic animosity.)

The side adopting the first narrative and ignoring the second seeks endless redress, preferences, and reparations.  The only path to justice is to make someone else pay. The solution to past racism is more (and vengeful) racism?  But the accusers of racism are themselves acting like racists — a potent propaganda technique, if practiced brazenly enough.

Death of the individual

The other side, not seeing America as irredeemably evil, is not about to concede, because, of course, they will lose status and opportunity if racial/ethnic/gender preferences continue.  They also, correctly, I think, see an erosion of America’s core values, with increasing emphasis on the state over the individual and on race/gender/ethnicity – again, over the individual and “the content of their character” (M.L. King) as an indicator of worth.

Instead, it would like an end to the relentless identity politics, the preferential treatment (“diversity”), the endless wars and social programs, and the white-oppression narrative – and, in the interests of equality, a recognition that not all white people are privileged and that many of them suffer too.

It’s not happening.  No wonder there’s so much mutual hatred. It’s a zero-sum game.  One side advances only at the expense of the other.

Both narratives are true and compatible and must be seen in context.

Does anyone else have the common sense and courage to call out this failure of even this most basic of critical-thinking skills?

Even Marxists understand that.  So what will happen if the two narratives are told side-by-side, and each side acknowledges the validity of the other’s version?

The proponents of narrative #1 (Evil America) try to (i) appreciate white suffering, (ii) recognize how American values have benefitted the human condition, and (3) back away from the “systemic racism” (that’s just name-calling to justify endless preferences) and acknowledge the nation’s slow but steady progress away from racism …and if the proponents of #2 (Good America) can acknowledge ALL of America’s history, including ethnic cleansing and enslavement, awful as they were…well, maybe we have the preconditions for a meeting of the minds.

The way things are going, it won’t happen.

Both sides are too invested in hatred and contempt for each other.  But this is what comes from ignoring or condoning language abuses and promoting critical-thinking errors like zero-sum and either/or.

And once again, why can’t we get a high-profile linguist on TV to explain the above and try to quiet things down?  It has already gone too far.

The ancient wisdom of Proverbs 18:21 once again proves valid: “The tongue has the power of life and death.”

While the cancellation of his accounts is deplorable, I must point out that Twitter was a magnificent opportunity wasted.  It was a platform for teenagers who didn’t think beyond 140 characters, just about the length of his attention span, and he used it like a teenager, spouting petty grievances, firing off opinions on everything, making policy and personnel decisions, even bragging about America’s weaponry (shut UP, Donald!).

What if he had used Twitter sparingly, for important statements, or to advance or report on his policy initiatives?  What if he’d stayed on-message with the things he’s doing to fight the pandemic and address the country’s problems? He had an enormous megaphone, the bulliest of bully pulpits, and he blew it, indulging his insatiable ego when he could have been doing his job,

Importantly, liberals share the blame for the country’s chaos. They are by far the more guilty of language crimes Their obsession with language control and race/gender and preferential treatment has frightened and enraged Trump’s followers and thus enabled Trump’s rabble-rousing and fear-mongering.  .