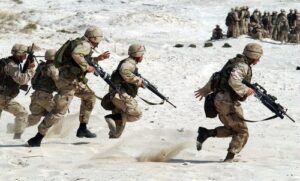 “Defense Department” or “War Department”? Repetition breeds acceptance. But what part of America are these soldiers “defending”?

The quote is from the man who served as Hitler’s Propaganda Minister and who (BTW, he was a linguist like me, with a doctorate in philology) would today feel quite at home in a PR or ad firm, or at the CIA or a related secret agency, or at one of the big tech companies.

Goebbels would be blown away by the power of today’s information-gathering and surveillance technologies: the more you know about people, the easier it is to manipulate them.

The value of repetition

He knew the value of repetition: it is essential to establishing the appropriate and conventional name for something or somebody (partly by excluding the alternative[s]).

As children, we love repetition, and the affinity never goes away.  We (unwillingly) remember commercial jingles from when we were kids. And through repetition, brand names like Kleenex, Scotch Tape, and Trampoline (it’s really called “a rebound tumbling apparatus”) become the conventional names, to the distress of the marketers who worked hard to build the brand name and were too successful.

No such thing as “mere” semantics

Because repetition breeds acceptance, word choice is serious business.  There is constant public debate, often irreconcilable disagreements, about what things (tangible items, but also events, past and present) should be called.  The label we agree on and repeat, to ourselves and like-minded others, both reflects and influences our perceptions and behavior in various ways, depending on which version of linguistic determinism you accept.

Matters get much more complicated when, as so often happens, we can’t agree on the label (or, in the macro-sense, the label for a sequence of events, i.e., the “narrative”).  This is where we are in America on a host of issues.

Word choices, especially when repeated to the exclusion of an alternative, influence actions and drive entire political movements.  Not to use the right word is a thought-crime today.  Be on guard when somebody says word choice is “mere semantics.”   As Steven Pinker notes, “there is nothing ‘mere’ about semantics.”

In Reader Supported News, Norman Solomon rightly calls for the replacement of “Defense Department” by “War Department,” which it was formerly called.  With a mind-boggling 800 military bases outside the country (China has one), it is clearly not defense that US is interested in, but war.  To call it otherwise is to further fray the connection between language and reality.

Actually, I would prefer that the department be called “defense” and really be concerned just with defense, but that train has left the station.

It is in fact the “War Department,” and hearing “defense” over and over leverages the repetition that Goebbels understood was necessary for successful propaganda (and advertising).

“War”: Millions of uses a day

With this particular phrase, the repetition is overwhelming: it occurs, I would guess, millions of times every day, as countless people speak, read, and write it 24/7.

Who can argue with defense?

Defense?  In the real world, America goes on the offense far more often and intrudes in local conflicts around the globe, with no end in sight.

So “War Department” it is!