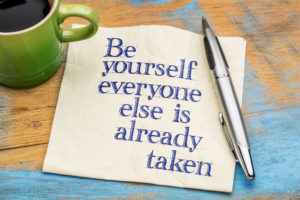 “…style is intrinsic and private, like…voice or gesture, partly a matter of inheritance, partly of cultivation.  It is more than a pattern of expression.  It is the pattern of the soul.”

Think of language as haberdashery: you have a closet full of clothes for every occasion. Your clothing choice expresses yourself in a particular context, for a particular audience.  In the same way, barely aware of it (or not aware at all), you change your speech to what you think (though there are no conscious thinking processes) will be effective for a particular situation and audience.

The many kinds of code-switching

“Code-switching” covers a wide range of speech modifications.  It could involve entire languages: English in public, second (or maybe native) language with other speakers of the same language.   Latin or Hebrew for prayers, otherwise, native language (what, God doesn’t understand English?).

Code-switching also happens within the same language.  It can involve any level of language – pronunciation, grammar, word choice, and intonation.  Examples are countless, but not always observable.  You can hear talking-head newscasters and commentators in their full-dress speech and occasionally hear them slipping into slang or up-talk (the practice of ending a sentence with rising intonation as if to say “do you get what I mean” or “was what I just said OK?”).  But there’s no telling how these same people talk around the house or in bed (or conflict) with their spouse.

Code-switching, when it doesn’t involve total language-shift, takes place within the speaker’s entire repertoire (or “idiolect”).  Which features vary?  And how?  The answer is different, depending on the speaker’s language makeup and the factors contributing thereto — regional dialect, social dialect, ethnic background, gender, educational level, and others.

Here the more appropriate metaphor is a sound mixer.  The operator moves the sliding switches up or down, to get the optimal mix of sound qualities.  As speakers, we vary particular language elements.  Which ones?  The answer’s going to be different and dependent on dialect and idiolect.  My wife, who’s from Long Island and has lived with me in New England for 10 years, can still be heard to drop her final r’s when she moves to a more emphatic/emotional speech range.

In his pioneering study of language variation (The Social Stratification of English in New York City), William Labov identified five linguistic features which varied in this manner: (i) presence/absence of final -r; (ii) and (iii) the th sound of this and thick, popularly rendered as dese and dose, which are inaccurate, since each has three variants, the t, the d, and a so-called “affricate,” in informal terms, a “t-th”/”d-dh,” where the dh is the voiced sound of this); (iv) and (v) two vowel sounds that vary in a similar way, but we’ll skip them for simplicity’s sake.

He examined the r-variation in his early “Department-store Survey,” in which he asked retail salespeople a question that would have to be answered by “fourth floor.”   He noted that the dropping of the r was quantifiably and predictably variable, depending on the store’s clientele and a number of individual factors.  Labov had identified the sliding scales on which language variation moved.

I did much the same thing with my doctoral dissertation, focusing on the signature grammatical features of the Hawaiian dialect of English.  These included the alternation of nava ( = “never”) vs. didn’t; and wen vs. past tense.  Both Labov and I were able to observe code-switching because we used then-new methods of linguistic field work that elicited natural speech that would reveal the range of variation in the speaker’s repertoire.

Code-switching is complicated by social, cultural, and environmental factors.  Black people have long struggled with the problem of “talking like Whitey.”  Some learn to switch and are able to use the appropriate repertoire of features as the occasion demands.  Sometimes the code-switching can be quite subtle, as when Obama converts final -ing to -in’ and uses folks.  Many other black people, though not incapable of learning a parallel way of speaking, have decided that it represents an unacceptable compromise.

Even then there’s considerable variation between the two extremes – just listen to the litigants on Judge Judy.   But a black accent is not a prestige way of speaking in most of America, which is why Joe Biden, early in the 2008 Presidential race, described Obama as “articulate.”  He meant that grammar aside, Obama showed no signs of the phonetic differences you hear in the speech of, say, Rep. Elijah Cummings or Jesse Jackson.  Translation: his speech would not reveal that he was black.  Actually, Obama did not grow up in black America at all — he spent his youth in Indonesia and Hawaii — but never mind.  He was “articulate.”

As far as environment is concerned, code-switching can become code-shifting — a drift toward the speech patterns of the people around us, assuming we have no negative judgments about the way they speak.  A simple personal example: Yiddishisms like schlep, kosher (for ‘acceptable’), oy vey/oy gevalt, schmuck, putz, schlemiel, and others which I used in predominantly Jewish Highland Park IL, have disappeared from my speech, bleached out by the WASP whiteness of New Hampshire.

Code-switching is essentially moving back and forth, altering the mix of linguistic features within one’s own repertoire.  When you move out of that and try to talk like your audience, they’ll see the fakery for what it is, given that they already know how you talk the rest of the time.  This is certainly the case when Hillary Clinton, a world-class plastic politician, adopts unnatural speech mannerisms, just as if I were to start sporting cowboy boots and a Stetson hat.

I reviewed news stories and YouTube videos about Hillary’s introduction of exogenous dialect elements into her speech.  Some is mimickry — the famous “Tammy Wynette” rant, for example, that has Hillary talking like a country song.  In other cases, she slides into black evangelical rhetoric, as in the first excerpt here: https://www.youtube.com/watch?v=_li-B2kuQqA .  And, to my amazement, the audience seems to be buying it.  This gives us an uncomfortable look into the dynamic between politician and audience: “She talks like me, so she must be like me.”

But it’s a gamble.  Your listeners may see through the fakery.  Can you imagine Trump telling a Jewish audience that in moving the Embassy to Jerusalem, “We had to schlep all our computers and equipment to the new Embassy building.  Ov, vey!  But such a deal!”  Somehow, I don’t think that would create a positive vibe.  You may not like what you get with Trump, but at least he’s authentic.

Now it’s your turn to play sociolinguist.  Listen to the people in your life and notice how their speech shifts, changes, and varies.  It’ll give you new insights into the complexities of language — and importantly. into their state of mind.

In a recent Mallad Fillmore cartoon, Bruce Tinsley has the ubiquitous duck saying “…and the debate rages on between ‘old’ and ‘new’ Democrats over whether Hillary or AOC does the better fake accents.” Hillary is saying, “Ah don’t feel noways taard!’. AOC says, “Ain’t nothin’ wrong with that!”

I love Tinsley’s work, but he’s got this one wrong. It’s not old vs. new. It’s code-switching vs. pandering. Can you guess which is which?