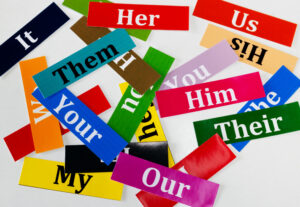 The goals of International Pronoun Day and the means by which they are to be achieved are vague, but it sure is fun to invent new pronouns!
Unfortunately, this is not feasible, given the role pronouns play in sentences.

Referring to people by the pronouns they determine for themselves is basic to human dignity. Being referred to by the wrong pronouns particularly affects transgender and gender nonconforming people. Together, we can transform society to celebrate people’s multiple, intersecting identities.

From the home page of International Pronoun Day

Woke/left tampering with and manipulation of language provides endless amusement.  The BS flies so thick and fast that it’s hard to keep up. International Pronouns Day actually started in 2018.  It’s the third Wednesday in October, so we just missed it.  The next one won’t happen till October 2022, so we all have lots of time to get ready.

I’ve already dealt with the pronoun issue in the above post.  Adding new pronouns is moronic and totally unworkable.  It’s potentially an immense undertaking, but that doesn’t matter because it’s not the work but the sentiment that counts nowadays.  And pronoun preoccupation is major virtue-signaling.

No one in the linguistics establishment has anything to say about the impracticality, not to mention the ludicrousness of trying to add new pronouns, because, in my opinion, linguists are (or trying to become) comfortably tenured in the very institutions that traffic in this intellectual garbage.

If they’re afraid, I understand.  They would be cancelled, fired, their tenure revoked, their publications erased…the fires of hell are too mild a punishment.

So I’ll have to do it for them, especially since the pronoun-multipliers are making it international!  Have they lost their minds? Or can virtue-signaling bear no relationship whatsoever to reality?

What does “international” mean?

Apparently somehow the pronouns of all the world’s dozens of major and thousands of minor languages are to be part of this virtuous effort to make sure every person in every country has enough pronouns (in addition to the ones they have or don’t have, and regardless of whether their pronoun systems are sex-based) to describe all the many genders in their city, country, region, society or whatever speech community they’re part of.

An immense and futile undertaking

Or does it mean that everybody, regardless of language, is supposed to figure out their gender and invent appropriate pronouns themselves?  There’s no implementation plan that makes sense, unless it’s just to talk about pronouns.

Is every language supposed to add new pronouns, with people making it up as they go along?  The task of language learning would become a hundred times more difficult.

Pronoun multipliers fail to understand the immensity of the task.  They lack the intellectual tools to understand the futility of what they’re attempting; it’s like trying to build a nuclear reactor from a kid’s chemistry set.

Gender in Russian past tense

Quick example, from Russian: the past tense is gendered three ways — masculine, feminine, and neutral.  All three will have to be augmented.

Are the people with international ambitions going to foist a couple dozen new pronouns on the Russians, to symbolize all the genders they didn’t know they had?

Could it be that the Russians – and everybody else who can’t afford the decadence of this preoccupation, given the awful problems that beset the world — don’t give a damn?

It’s a goal that can’t be reached, so we’ll have a perpetual divide between the pronoun-mongers, on the one side, and, on the other, the traditionalists plus the I-don’t-give-a-damn-people.

Maybe the Pronoun Day people mean only the English-speaking world.  Still,  that’s a gargantuan effort.  In either case, pronoun missionaries must be sent around the globe  to spread virtue and pronoun awareness.

The right feelings and words

I looked at the “How to Participate” page of the site.  The techniques are simple grassroots organizing, including buttons, T-shirts, and publicity, as if this were a campaign for a ballot referendum, instead of a futile effort to get people to change their language habits in a major way that unduly increases the cognitive burden of getting things said.

But hey, the formidability of the actual effort doesn’t matter: it’s all about having the right feelings and saying the right things.

My pronouns are wo, ni, ta (‘I,’ ‘you,’ ‘he/she/it’).  They’re the Chinese ones, and if current trends continue, knowledge of Chinese will be beneficial.