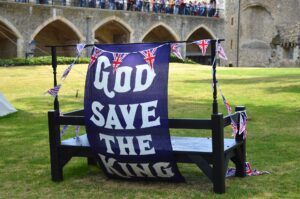 One of the countless slogans by which we live.

“Man is a creature who lives not upon bread alone, but primarily by catchwords”

(NOTE: a catch-word is technically what we today would call a “pull-out quote”; I’m using it in a broader sense here, to refer to slogans, mottoes, taglines, and catch-words.)

I keep quoting Stevenson because his observation is so true and has been for a long time.  We love slogans even more than we love narratives and conspiracies…because slogans are the verbal equivalent of Paxil and Wellbutrin.  They encapsulate whatever some leader or group of people decides is the best summary of what the product, movement, party, etc., is all about, while they make us feel good about it.

Slogans banish thought, as does loud, public chanting.  As M&M’s for the mind, they feed us, in one sweet bite, what we’re supposed to believe.

Slogans may be the output of one or more persons or — perhaps, these days — by highly-paid consultants.

In advertising, they are everywhere and repeated endlessly.  If appended to the ad, they are “taglines.”  Some of them become earworms (from the 60’s: “Winston tastes good, like a CLAP, CLAP cigarette should” – and I never smoked!).  And today, the Liberty Mutual tagline “only pay for what you need.”  If you can avoid all advertising, you can avoid slogans and the resultant earworms.  Good luck.

“The quicker-picker-upper” (paper towels) neatly summarizes product benefits. “Like it never happened” (restoration/cleanup service) states a specific goal.  Those are two of my favorites.   “Good to the last drop” (Maxwell House coffee) goes back to 1915.  Teddy Roosevelt was supposed to have said it, but maybe not.

Corporate mottoes can be aspirational.  Google started out with “Don’t be evil.”  Hmm, wonder how that worked out…

Companies can also have internal slogans, to guide and motivate employees.  At one place I worked, they were “Undisputed Industry Leadership” (an alpha-male slogan) and “Focus, Innovation, Passion” – (somewhat) specific things to work at.  Again, a good slogan gives you an actionable (if vague) goal.

“MAGA” seems to set goals but really doesn’t.  Greater how?  Greater than what?  Than when?  Restoring the dominance of the 50’s and 60’s is not an option, Interpretations are so numerous that we have “semantic overload.”

Slogans may be used to brand states.  “Live Free or Die” is the motto of my home state, and we’re proud of it.  It is one of the best slogans of all time, and not just because I live here.  It represents a fundamental choice in life, and we are reminded of it every day by the license plate on the car in front.  How insipid is “The Sunshine State”?  Who cares how many lakes you have?  The fundamental question is: how free do you want to be?

Slogans can be used to brand universities.  My college had “In Deo Speramus,” a nod to its Baptist founding, though God didn’t do you much good when you were taking two three-hour finals in one day, all essay.  Countries can brand themselves.  “A legacy of the Age of Enlightenment, the motto Liberté, Egalité, Fraternité became the national motto of France” (Wikipedia).  Our national motto, e pluribus unum, is now wholly aspirational and shows no signs of becoming reality.

Note: When Trump says that “In God We Trust” is our national motto and no one contradicts him, you can see religion’s profound influence on politics.

Another product is war.  In World War I, how many young Brits, who could have grown up and benefited society in all sorts of ways, ran straight into enemy fire shouting “For God and King,” as if either of them gave a s**t what happened to the cannon fodder.

Slogans can be used to sell politicians and political parties and agendas.  American political slogans range from the dreamy “It’s Morning Again in America” (Reagan 1984)…to the weirdly circular “We are the ones we’ve been waiting for.” (Obama 2008)…to the meaningless “Change We Can Believe In.” (2008, Obama again).

Recent political slogans continue the descent into meaningless and insipidity. Hillary boasted “Stronger Together.”  What’s your point?  So is a sports team or an army.  Stronger to do what?

Biden wants to “Build Back Better.”  As a speechwriter I appreciate the alliteration and the triad, both of which tell me that this is a corporate product.

Like so many slogans, this does not survive a moment’s inquiry into what it means.  Build what?  Back from/to what?  Better than what/whom?  Trump, I suppose.

A recent Mallard Fillmore cartoon (Manchester Union-Leader, 12/7/20) shows a Democratic donkey in front of a flip chart that reads BUILD BACK BETTER.  The donkey says to reporters, “Think of it as our answer to ‘MAGA.’  Same semantic overload, none of that silly rhythm, catchiness, and effective brand messaging.”

Excellent analysis. MAKE aMERica GREAT aGAIN does have better rhythm: a distinctive four-beat.  BBB is a three-beat that trails off.

As for catchiness, MAGA contains two extremely affective (and effective) words, plus a proposition within itself: “America great.”  BBB uses weak, everyday words.  Who can get excited about building?

Effective brand messaging means that the slogan can be repeated countless times, proudly displayed on hats and other merch, achieving what marketers call “ubiquity.”  Anybody wearing “Build Back Better” caps?  You hear it at the end of every Trump speech.  Repetition breeds indoctrination.  That’s effective brand messaging.

Slogan that dominates our time

Slogans can also brand a political movement, and so we come at last to the slogan that dominates our time: Black Lives Matter.  Like most slogans, it is “headless” in that it discourages thought, skepticism, and dissent.

But it’s headless in another sense as well: it’s a tail without a head, a response to an assertion nobody made. It does not stand independently as a discourse/conversation opener.  If I say, out of nowhere, “Hey, you know, black lives matter.”  Your response would most likely be (before the current chaos) “What? Who said they didn’t?”

“Black lives matter” is a response to an always-implied “Black lives don’t matter.”  But did anybody say that?

If you want to see what “lives don’t matter” looks like, read some history.  Genghis Khan killed millions.  Or how about the Russian execution of over 20,000 Polish officers?  At Auschwitz, at peak production (or reduction), they were snuffing out 2,000 lives a day.  Or read about the Turkish genocide of the Armenians.

Or, what the hell, just read a few histories of various wars, and you’ll see how for centuries, for millennia, hundreds of millions were slaughtered in the name of the Fuehrer, the Fatherland, the Motherland, the Church, the faith, God (or other deity), some King/Queen/Prince/Duke, communism (and other –isms), Comrade Stalin, the Emperor, Comrade Mao and other insane individuals and causes.

Those lives definitely did not matter.

Similarly, there would be evidence that Black lives didn’t matter if, as Pat Buchanan notes, America were “a place where white cops harass, brutalize, assault and kill Black Americans regularly and with impunity.”  That America may exist in the left’s fevered imagination, but it is not everyday America.  The fact, the reality is that police abuses do occur, but there is no evidence of routine brutality with impunity.

How to know if you should stop reading this

If you are, like me, interested in truth, read on.  If you are convinced that there is wholesale disregard only for black lives only on the part of police and that blacks are uniquely targeted, as if other people’s lives don’t matter, stop reading and wasting your time.

OK, red pill: if you look at the slogan in a conversational context, you see that it’s a tail without a head. There is no wholesale slaughter of blacks, except by other blacks.  So who is acting as if black lives don’t matter?

The numbers do not lie.

So as a slogan, “Black Lives Matter” is a failure.  It is vacuous.  It gives us nothing to act on or think about, because it is a response to an assertion nobody made, but which is inferred from police behavior.  But again: police kill many more whites than they kill Blacks.  And about the same number of Hispanics. And most black murder victims are killed by other blacks.

Blacks are not singled out for wholesale slaughter like the Jews or the Armenians or anybody Genghis Khan conquered.  All lives matter, including little Black kids killed in gang crossfire.  (The drug war must end – that’s the only point on which I agree with the radicals.)

In practice, it means, ‘do anything you want, including to property or police…because BLACK LIVES MATTER.’  That makes no sense, but it doesn’t have to.  One columnist described it as “virtue gone insane.”

Once again, I ask: where are the voices from academia?  High-profile linguists like McWhorter, Lakoff, Chomsky the Great One?  Can’t spare a minute to note how the country is being torn apart by the dishonest use of language and the undermining of communication with thoughtless. divisive slogans?

Silence.  They’re comfortably tenured (or struggling to get tenure) in the very institutions that support this dangerous, destructive nonsense.  Shame on them.

OK, made my point.

Not that it will make a difference. “Black Lives Matter” has come totally unhinged from any conversational context.  It doesn’t matter that the sequence has no “head,” no lead-in, no documentation of any kind for the proposition that “Black lives don’t matter.”  It is now a tidal wave, a national mantra, meaning different things to different people, justifying anything, a rallying cry for miscreants of all kinds.

Maybe it’s not a failed slogan after all

So perhaps it is not a failed slogan after all.  Its very vagueness and untouchability make it a cover for any behavior at all.  Maybe it is one of the most successful slogans ever.