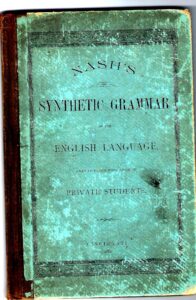 A grammar book from the 1870’s shows language changing and sheds light on a contemporary language controversy.

Many languages. . .have no gendered pronouns.  English needs a gender-neutral singular pronoun, and as Winston Churchill said about democracy as a form of government, “they”  is the worst option, except for all the others.

Language changes, perhaps in response to social pressure or a communicative need – or for no functional reason at all, as with hone in on replacing home in on, mainly, I guess, because the two sound alike, hone connotes focus and sharpness, and people forget what the home in home in on  means.

Language is constantly changing all around us, for a variety of reasons.  Today these forces include, as often in the past, the attitudes of the speakers.  There’s a lot of concern today with two pronoun issues.

One is the pronouns people use about themselves and others.  I’ve dealt with this issue elsewhere.  Exquisitely gender-sensitive people want to multiply pronouns beyond all reason, but it’s a doomed endeavor.  You can’t consciously dictate new pronouns; they’re basic reference-words that speakers/writers do not need to be conscious of as they spin out their utterances.  Just getting meaning right is hard enough.

But this is not the only place where pronouns and politics intersect.  And this other problem is worth resolving because it occurs in many, very common kinds of utterances.  What do you use when the antecedent (the word the pronoun refers to) is a singular indefinite: A person should take care of his/her/their teeth? Or distributive: Everybody should take care of his/her/their teeth?

Some gender warriors want to mix he and she in their communications or use he or she, s/he, or, even worse, use she exclusively. The two are not equivalent.

In the current issue of Harper’s, Anne Fadiman contributes an essay entitled “All my pronouns: How I learned to love the singular they.”

She quotes a letter to the Crimson by Harvard Linguistics Chair Calvert Watkins and 16 colleagues to the effect that he, man(kind) and the like were unmarked (“default”) forms, whereas the feminine pronoun added information and was the marked form.

The marked form includes both – that’s why it’s the default.  I’ll comment more on this in the next post, where I review Fadiman’s article in detail.  But she and I come out in the same place, as her subtitle shows.

I know, this is hard for laypeople to grasp. The masculine and feminine forms are seen today as either/or alternatives.  Does English have too much gender marking, as Fadiman suggests?  It’s not alone. Take a look at the Russian past tense: on govoril, ‘he said,’ ona govorila, ‘she said.’  What purpose does that serve?

But that wasn’t enough for the feminist language police. If they saw man anywhere, then the speaker must be thinking “man” and excluding women.  Where the word doesn’t reflect reality (postman, etc.), it should be changed.  But does saying “A doctor might use the new drug on his patients” mean you don’t think women should be doctors?  Barring the ability to read minds, the question can’t be answered.

Another issue, 100 years ago

A doctor might us the new drug on their patients.  How does that sound?  One thing is sure: you’re not going to stop in the middle of the sentence and decide to say “his or her.”  They is firmly entrenched in colloquial speech.

For those who resist an awkward-sounding but neat problem-solving innovation, here’s an exact precedent for gender-neutral they — an issue that was decided just recently – whether to admit a new kind of verb phrase, the progressive passive (alternatives are being considered).

I have actual evidence. You would think a linguist would have a least a modest collection of old grammar books, and I do.

A new kind of verb phrase

There is a slim volume entitled Nash’s Synthetic Grammar of the English Language, published in 1876 (Charleston: Gibbens et al., printers).  In its 93 pages, it assures the reader that “every important principle that may be found in the largest grammar may be found in this little book.”

Of interest here is the following comment on correct usage (p. 31):

“Sometimes an active verb is used in a passive sense: as, ‘The bridge is building,’ i.e., ‘The bridge is undergoing the process of erection.’ ‘The bridge is being built,’ is an incorrect expression, unless the speaker wishes to affirm that the bridge exists built–finished; and even then, it could be an exceedingly awkward and labored expression.”

Obviously, something happened in the next few decades.  Nash was overruled. People were using the progressive passive.  It was probably happening when he wrote — or why would he have mentioned it?

They observe that the progressive passive exists, but put it in parentheses in the verb conjugation, with an asterisk that refers the reader to this:

“Even progressive phrases are sometimes found in the passive form. As in — The prisoner was being tried for theft…The question is being very carefully discussed.

“’The house is being built,’ may be awkward, but it is allowable and exact, and surely better than ‘in process of construction’” (p.170).

I couldn’t agree more.  The language needed a way to combine progressive (ongoing) meaning with passive (being done to).  We used to have a passive prefix: the house is a-building.  It’s easy to lose the prefix, and you have exact isomorphism with an active subject+verb sentence, e.g., the bulls are running.

It’s not that we always need the being.  The language already has a number of what Huddleston and Pullum (Cambridge Grammar of the English Language, p. 307) call “middle intransitive” verbs — active in form, but with passive meaning: She doesn’t frighten easily. The turkey is cooking slowly.

I think the reason for the adoption of the progressive passive lies in information theory.  The being adds a bit of redundancy, immediately disambiguating the two kinds of sentence, progressive active and passive, which tend to sound alike.

Without being, all we have to depend on is context — and our knowledge of middle verbs.  If both of these failed us, e.g., The soldiers are shooting!!”  (shooting or being shot?), we would be in deep trouble.  Hence, being.

OK, back to gender-neutral they

In the past half-century, people began to infuse language with gender politics.  All of a sudden, the apparently ubiquitous root –man- was proscribed.  People decided to be offended, and so they were!

Do not flaunt your gender sensitivity by using she mixed with he – or worse, writing a whole book with only she (I encountered this recently, and it is really irritating).  Failing to understand the difference between marked and unmarked leads an oh-so-gender-conscious writer to introduce unwanted additional information, evoking, over and over, the reaction “’She?’  Who’s he talking about?”

#1: If the context allows it (and most do), you can use indefinite you: You (i.e., all of you) have to take care of your teeth…or indefinite we (we have to…).

#2: Formal writing and speech use one: One must take care of one’s teeth.

#3: My go-to solution is to switch to the plural: Doctors might use the new drug on their patients (instead of A doctor…).

#4: If you can’t do any of these smoothly, use they/them/their/themselves.  It’s already well-established in speech.

Most important of all: It is a simple, elegant solution that, like the progressive passive, fills an obvious need in a simple – and simplifying — way —  and lets us get on with the business of communicating.

That will be the policy of this blog from now on: to pursue one of the above solutions, including, where appropriate and necessary, gender-neutral they.  Like the progressive passive, it sounds awkward to some.  But get over it.  It’s here to stay.  If anybody wants to discuss it, they can write to me at alanperlmanphd@gmail.com.