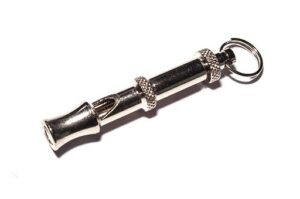 This is a real dog whistle. But what do people mean when they refer to speech as a “dog whistle”?

In politics, a dog whistle is the use of coded or suggestive language in political messaging to garner support from a particular group without provoking opposition. The concept is named for ultrasonic dog whistles, which are audible to dogs but not humans.

The dictionary site www.ludwig.guru defines by example: When political parties have policies that will appeal to racists while not being overtly racist, they are indulging in dog-whistle politics.

I keep an old Random House Webster’s International dictionary (yes, a very thick book!) for historical purposes.   The last copyright date is 2001, and dog whistle doesn’t appear.  So it’s got to be fairly recent.

I don’t quite agree with either of the definitions.  Before I attempt my own, let’s look at the phrase in various contexts (courtesy ludwig.guru, except [a]):

(a) First, a recent example, from the ongoing controversy in San Jose over supposedly racially-tinged images in political ads (forwarded to me by Chris Escher of OpportunityNow);

“I was a little surprised because I never endorsed Sajid,” Wahab told San José Spotlight, adding that she’s faced death threats since the mailers went out. “He’s not in this race. The fact that they take a dark-skinned Indian man with a beard who is Muslim and tie his communication—much of it out of context—is quite disgusting to see. These are dog whistles. At the end of the day, the damage is done.

(b) …he’s got a specific allegation, why doesn’t he put it in writing, why doesn’t he be specific?  This is nothing but dog whistle politics. Listen, there are historical inequalities and they need to be balanced. (from The Guardian)

(c) …Higher education is public good not private benefit, he suggests.  This is a dangerous dog whistle.  Education is a public investment in the future of our country; it is not solely a private benefit. …(Ibid.)

(d) …Somehow I doubt he means the community of 300 million Americans.  That sort of thing is not a dog whistle attack. It’s audible to anyone… (New York Times)

(e) …sounded, as well as the audiences his own coded messaging was intended to reach.  The dog whistle began vibrating at mysterious frequencies. A dramatic example of this occurred early in Obama’s first term, when the Harvard … (New Yorker)

(g) …If every age has its sounds and smells, it also has its flavors. The taste of 1789 can be a dog whistle to modern palates. “The big problem is that we’re modern people who’ve grown up with refined sugars and …(The New Yorker)

What do we get from these examples?

In practice, the phrase has a number of related meanings, but they all (except the last, which is kind of an outlier and implies a “something’s wrong” warning) capture the metaphor of something that means something other than what it says, to a particular group, present or not, whose members get that meaning.

As is so often the case in language, the words people use tell a lot about them.  Let’s go over the outrageously improbable assumptions that underlie “dog whistle”:

(1) The words someone said or wrote do not mean what they appear to mean.  It’s hard enough to define “mean” and “appear to mean.” Presuming (1) is a huge stretch.

(2) The definitions and examples refer to “coded messages” but there’s never any glossary that would tell us what the codes are and how they are to be interpreted.  That’s because “coded” is a throwaway judgment on the part of the speaker, who has already identified the dog whistle.

(3) The user of the term has already identified the audience who hears the dog whistle.   Another stretch.

(4) The user of the term can read the minds of the people who hear the dog whistle.  Thus he/she knows how those people will understand the words.

Linguistic intention and perception take place in the brain and are therefore difficult if not impossible to determine with certainty.  We have nothing overt to work with except the stream of speech sounds and the accompanying gestures.  So it takes equal measures of arrogance and ignorance to assume (1)-(4).

So: “Dog whistle” is a derogatory term for language that doesn’t mean what it appears to mean but has some other (‘racist’ is a favorite choice) meaning to other (un)identified people, via a mysterious “coding” process.

No wonder it’s such a useful rhetorical tool.  But you have to question the ethics of people who use it.  Either that, or be impressed that they’ve pulled off a triple mindreading act.