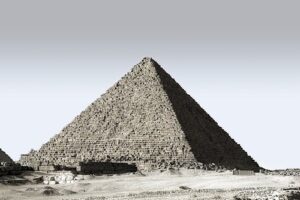 Bad decisions flow downward and outward in the organizational pyramid, spreading bad ideas through obedience and the suppression of cognitive dissonance

“A wise man changes his mind, but a fool never.”

“Unadvised hasty judgment is a token apparent of a very slender wit.”

America’s chaotic and humiliating exit from Afghanistan did not just happen.  Human decisions instigated and implemented it.  But the key question, if we are ever to hold anyone responsible for this disaster, if anyone is to be tried and convicted of crimes against humanity (in America? forget it: Dubya, Rumsfeld and Cheney should be in jail for life), we have to find out who.

Smarter than a fifth-grader?

Any fifth-grader could have figured out that to evacuate in an honorable, dignified, casualty-free, orderly way, the US should have first facilitated the exit of allies, translators, Americans, and others.  Then destroy or remove the military equipment.  The military departs last, because they have to defend while the first two steps are taken.

We hire politicians, at the very least, to make decisions as obvious and elemental as these, and they fail.  Someone gave the order to abandon the air base, the equipment, the allies, and the civilians.

The shadow claque of advisors and handlers who prop Biden up and thoroughly script him?  The people really running this country, whoever they are (because it certainly isn’t President Zero)?

Who decided to abandon Bagram air base, leave allies and Americans behind, and present a parting gift of our war technology, billions of dollars’ worth?  We can’t just have theatrical congressional hearings in which generals are grilled and mumble their doublespeak justifications, and nothing happens.

Who is the decider?

Whoever made these imbecilic decisions has on his/her hands the blood of every American who dies in a future conflict (and there will be more, count on it) because his adversary had an American rifle and night vision goggles.  And now they have aircraft!

We’re all familiar with the metaphoric “chain of command.”  Orders must be passed on and obeyed, as rigidly as the links of a chain.

I suggest that this is the wrong metaphor.  It’s not an insignificant issue – far from it.  Metaphors are everywhere in our language, and the ones we learn and use represent the ways in which we perceive and define the world.

In organizations, orders are not obeyed only in a straight line, but horizontally as well.  You obey because everyone around you does the same.  Since there are more obeyers at the lower levels of rank, we should think and talk in terms of a “pyramid of obedience.”

The pyramid is as solid and immovable as the real pyramids, and finding out where a bad decision came from requires the same kind of digging into the pyramid’s interior as is practiced by real-life grave robbers.  But that’s where the secrets of organizational ineptitude are hidden.

Orders issued at a certain point in the pyramid radiate downward and sideways.  They can originate from various points within, as what is variously referred to as the “deep state,” the “national security apparatus,” or merely “the permanent government” exerts its will and makes policy decisions that are carried out by everyone below.

Thus, decisions may or may not come from the top. In America today, the apex of the pyramid, often called “the President,” is empty of content, and it revolves according to the whims of one party and the puppeteers operating just below the apex.

It’s not the way things were supposed to work in America. But it’s far from the first time that a weak vessel of a nominal ruler is manipulated by his courtiers.

Who made the decision?

Now the interesting thing about the pyramid, if we are to try to understand how disastrous decisions are made, is to find out who originally made the decisions, and how.

At some point, these decisions had not been made. Then they were.  Implementation was set in motion.  Can there be no records of who said and wrote what, and when?   No memos, emails, notes, documents of any kind?  No evidence that particular human beings initiated action through their words?

There have to be words, in some permanent form or other (something this big couldn’t have been communicated to so many people orally) — or how else can there be orders?

This is what Congressional investigators should be focusing on: find the words.  Find the words that really tell us who initiated this disaster.  Who told whom to do what, when, and how was it communicated?

The President knew (but maybe forgot).

I‘ve been listening and reading carefully, and I know that Biden’s generals and advisors were aware that Afghanistan could rapidly collapse and (if they’re not lying) advised him that we should keep the air base and a small military presence.

This still doesn’t tell us who first thought of the disastrous plan (or some piece of it), because either Biden, with no brain or idea of his own, takes orders from someone else, or these wretched decisions were made on his behalf.

It doesn’t help that organizations containing the deciders and the obeyers are referred to by singular collective nouns – General Motors, the Biden Administration — because these can be made to seem the subjects of active sentences (The Biden Administration told the Department of Justice to investigate…), as if the entire organization acted as one.

Well, it did – but there has to be an instigator.  Who had these terrible ideas, and who was in a position to see that they were implemented?   Start with the implementers, ask where their orders came from, and so on up the pyramid.

It’s a straightforward process.  But then someone one might be found responsible, and we can’t have that.

The Pyramid of Obedience

One way or the other, the ineptitude in this case apparently came from the top of the pyramid.  And it spread downward and outward in a cascade of obedience.

If, at any time or at any level, anyone – and that would be anyone with the intellect of a fifth-grader — questioned the idiocy of leaving behind an arsenal and thousands of civilians and allies…well, everybody around me is doing it, and orders are orders.

The study of obedience

Political science is, among other things, the study of obedience.   At some point — at many points, in fact — the downward flow of obedience encounters the resistance of a rational mind.

When this happens, in order for the pyramid to maintain its structural integrity, powerful forces must be brought to bear, by individuals en masse, on the cognitive dissonance between (i) the irrationality and unachievability of the goal; and (ii) the categorical need to obey (and tell superiors what they want to hear).

Battling the cognitive dissonance involves deifying (in effect giving one’s free will, body, and reasoning power over to) the chain of command/pyramid of obedience; or to the mission; or to one’s superiors; and, if these fail, there are duty, honor, and country, words that can reliably be counted on to trigger even sacrificial obedience.

But if after all this, you cannot live with the cognitive dissonance, if you do question it, the entire weight of the pyramid falls on you, and you are punished harshly.

That’s what happened to a courageous 17-year Marine officer who dared ask the question that no one in government wants answered: who is responsible?