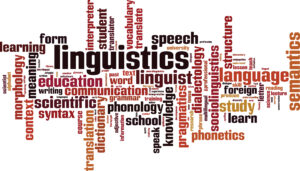 Linguistics consists of many sub-disciplines, all devoted to the study of language.

“Linguistics is virtually invisible to most people…”

“Critical Race Theory” is not going away.  Although the slogan is heard almost everywhere in academia and education, almost no one inquires into what it actually means in practice.

It means a lot of different things, which is a good thing for its adherents and practitioners because, they can do anything they want in the name of this impressive- sounding undertaking.

The content of CRT can be expressed in just eleven words: White people are bad, everyone else is good, racism is everywhere. Parents are just becoming aware of the slogan’s actual content and how it is being used to indoctrinate their kids.

“CRT” must therefore be exposed for what it is: an academic-, intellectual-sounding cover for yet more (and never-ending) prejudice, preferences, and obsession with race, which are the only solutions to the problems identified  by CRT.

I started by critiquing the slogan.  Part II is: Where are the qualified professionals who should publicly be exposing this and other liberal language abuse?   Why are they not speaking out against it?  Where are the academic linguists?

Back in the day…

…I served a term as President of the Michigan Linguistic Society.  In my inaugural address, I argued that whatever truths linguists manage to uncover about language, wherever their theories and research lead them, they bear a certain responsibility to use their expertise to opine on language issues in the public interest, or else the discipline would become irrelevant.

And so it has.  And at the worst possible moment.

Most people have never heard of linguistics.  It has no Anthony Fauci, no Neil DeGrasse Tyson, no Alan Dershowitz, nobody who is ever called on to help the public think carefully about language and to call out its irresponsible use.   This may involve…

Despite the invisibility of their profession, linguists must not be scornful of one thing they can do: “scientising lay concepts.”

Most laypeople, even educated ones, are not even at this level.  They use language every waking moment but they haven’t a clue about how it works, even in the abstract but useful terms which we provisionally agree to use as if we knew what they mean (noun, predicate, sentence, meaning), let alone how it can be used to manipulate and divide them.

Ironically, of the world’s most famous intellectuals is a linguist (and not a very good one).   And he hasn’t got a thing to say.

… has the time to bloviate 200 books’ worth of blather about invisible mental structures and America’s evil foreign policy, but he hasn’t got time to go on network/cable TV and warn against the destructive, counter-productive use of language in the public square.

I will repeat this ad infinitum:

Why has no high-profile linguist spoken out on the left’s manifold language abuses?   There is no shortage of medical doctors, climate scientists, legal scholars, psychologists, economists, and other knowledgeable professionals giving their opinion on significant social and political issues on which they can bring their expertise to bear.

They write op-ed pieces.  They create public letters/full-page ads with dozens of signatures.  They appear on TV.

There is no credible professional (except me) who’s calling out the deliberate and malevolent manipulation of language, which, broadcast non-stop by the liberal/left (which controls academia, the media, and the government), divides the country and creates more animosity every day.

This is the most central political issue of all, because control of language is fundamental to control of thought and behavior.

And nothing happens without language.

Here’s a partial list of offenses, each one deserving of a post, and they’re all happening at once, creating a noxious miasma of language prohibitions, conflicts, and absurdities:

(1) Dishonest euphemisms and re-labeling (equity as a new cover for ‘forced equal outcome’; inclusiveness and diversity as euphemisms for ‘preferences’ and ‘quotas’).  A fundamental technique of all political propagandists.  Re-labeling can defy reason and reality, as when Biden’s all-female communications team was presented as a sign of diversity. So  Uniformity = diversity.!  “Exclusiveness” (of Whites) = “inclusiveness” (of everybody else).

Sometimes the re-labeling consists of an inordinate, unconventional, but politically useful broadening of meaning, as with the Democrats’ use of infrastructure to mean ‘anything necessary for anything else to happen’ e.g., day care.

(2) Vicious and mendacious name-calling. The most egregious example is the relentless and pernicious drumbeat of “racist” or “white supremacist” to stigmatize anyone who dares to question the oppressor/victim narrative.

A current example is the characterization of a proposed state voting law as Jim Crow 2.0, which dishonors the suffering of people who lived and died under the horrors of the real Jim Crow.  The President likes to say “Jim Crow on steroids.”  He repeats it robotically.  Maybe he hopes it’ll catch on.  Maybe he thinks he’s a clever phrasemaker.

(3) Misrepresenting what a document says.  Linguists need to emphasize the importance of simple fidelity to the text.  The “2.0” demagogues have not (or pretend they have not) read the law they object to.

(4) Elaborate, impractical, taboos in which the offense is manufactured by the perceiver, e.g., a plethora of ridiculous “gender-sensitive” language rules and vocabulary replacements, which would make discourse impossible under the added burden of remembering the countless ways to say things (in)correctly.

(5) New sets of equally ridiculous and unworkable pronouns.  This has gone beyond absurdity: I recently got an email from an attorney who, in addition to the usual contact information, listed her preferred pronouns – the latest form of virtue-signaling.

(6) Meaningless slogans with vague but emotionally-loaded words.  “Our diversity is our strength.” – it’s one of the core rationales for preferences, quotas, and “equity” (= engineered equality). But what does it even mean?  Is it true, and if so, how?   All around the world, diversity creates discrimination, mistrust and strife. Monoethnic societies seem to do pretty well.

(7) Impressive-sounding word salad, as when Congressperson (and suburban-raised, faux race-crusader) Sandy Cortes (I will never give her the honor of all-initials; that’s reserved for people of consequence like FDR or LBJ) tells us that we must not use the word surge to describe the spike in immigration because that implies insurgents, and that means invasion, which has historically been a White thing to do.

Wait…what? Only Whites have ever invaded anybody?  We do not need this gibbering nitwit to lecture us on history and etymology.  You can see her eyes bulge as her brain struggles to assemble a chain of unrelated buzzwords.  She is further proof, as if we needed it, that there is no intelligence requirement for membership in Congress.

…that all of the above are absurd, divisive, and impractical.  It’s saying you believe in them that signals your virtue, and that’s what counts..

Linguists should be on TV, calling these practices out.  Americans should be aware, at the very least, that

— the political/media/educational (PME) complex is trying to dictate to them, for political purposes, how they can use their native tongue.

— the PME complex is trying to control them by arbitrarily re-defining words and by telling them what words mean.

— liberal language programs are unworkable and useful only as virtue-signaling.

You cannot add basic structure-words like pronouns.  Conversation would come to a halt as speakers struggle to remember which of a dozen pronouns applies to the listener/reader.  It’s even worse if you’re talking to or about more than one person.

A nation of inarticulate hominids?

Why is Cortes given such a large and unquestioning audience?  When she turns the surge into an indictment of White people (whatever that means), does anyone ask, “What the hell does that even mean?”  Have we become a society of uninquisitive hominids (national motto: “Duh. Whatever.”)?

So I’m calling you all out again.  Lakoff, McWhorter, Pinker and (let us genuflect as we say his name) Chomsky – why not a peep from any of you?

And until I hear a more plausible explanation, I’ll go with my usual one: they’re all too comfortably tenured in some of the very institutions which (along with the mainstream media and brainless politicians) promote these unconscionable language abuses.

And linguistics will remain invisible.