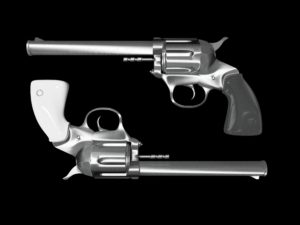 What does the 2nd Amendment really say?

One thing I understand about New Hampshire, after ten years here, is that the state’s bold and famous motto, “live free or die,” refers mainly to the second half of the 2nd Amendment.  (NH is the last state in New England to legalize cannabis.)

But when we try to read it as a whole, it makes the right to bear arms problematic and equivocal.

A well regulated Militia, being necessary to the security of a free State, the right of the people to bear arms, shall not be infringed.

Right away, to gain any sensible modern interpretation, we have to throw out the comma after “Militia.” That may have been an earlier punctuation of a conditional phrase, but no longer.

We also get rid of the comma after “arms.”  It’s a subject-verb comma.  That’s not the way we write English nowadays.

Second half depends on the first

The way it’s written, the second half of the Amendment depends on the first. Apparently the founders had in mind a citizen army like Switzerland or Israel, where eligible citizens are also militia members.

But every gun-lover in New Hampshire has an interpretation that suits his/her right to bear arms – or disregards the first half entirely.

Maybe they believe that old canard about being ready to defend themselves against tyrannical government, like the Minutemen or Green Mountain Boys. Too late, guys. The government already has all the firepower.

The right to bear arms

Really, I have no objection to responsible gun ownership, for a variety of legitimate reasons. But to rely on the 2nd Amendment for justification is to put yourself on shaky rhetorical ground. It just makes no sense in the light of circumstances today.

I’m partial to the argument that says that we already have a well-regulated militia — the National Guard — but what does that have to do with the right to bear arms?

It’s remarkable that so much of a document drafted in the 18th century is relevant and applicable today. Unfortunately, the Second Amendment is not.