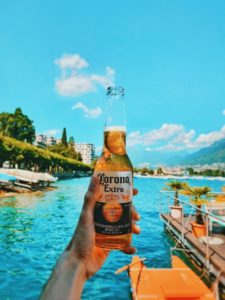 Homonyms are words that sound alike but have different meanings.

Being inoffensive and being offended are now the twin addictions of our society.

Corona beer? Coronavirus?  What do they have to do with each other?  Absolutely nothing.  They’re homonyms – multiple meanings for the same sequence of sounds.  The English language is full of them, but only a few cause trouble, by which I mean they become infected with a “political virus.”

I would not want to attend the panicky meetings going on inside the walls of the marketers of Corona®  beer. The bugaboo of the current news cycle is the supposed connection between the worrisome coronavirus and the beer of the same name.

Semantic confusion and the end of a brand

You work for years, decades, to build a brand based on a strong trademark (“a crown”)…and this happens.    It’s every marketer’s worst nightmare.  Through no fault of your own, your brand acquires a really ugly (though irrational) connection – and then what?

It’s happened at least eight times.  The most famous recent example was the diet candy AYDS.   But please read the whole article. I especially liked Pee Cola and Shitto gravy, both from Ghana.

I would add Spic ‘n’ Span, the venerable household cleaner, But I haven’t heard of anyone offended by the first syllable.  Just to be safe, I say “Hispanic and Span” when I refer to the product or the condition of cleanliness for which it is named.

Even common words can be affected.  Niggardly, from an old Scandinavian word having nothing to do with negritude, is due for obsolescence because of its first two syllables,  Similarly, of the two pronunciations of the name of someone who plays the piano, “pi-AN-ist” seems preferable, since “PEE-an-ist” is too reminiscent of “penis.”

Of virus and beer

This is a disaster for the Corona marketers.  Although the virus (so named because of its spiky protuberances) and the beer co-existed before, it was the sudden and dangerous spreading of the virus, throughout populations and, much more rapidly, through the media that created the supposed connection.

If the beer executives keep the beer on the market, they risk extinction. If they take it off the market and launch a similar product, they will have yielded to a spurious distinction borne of ignorance of language and meaning.  It’s a lose-lose.

Meanwhile, people are Googling “corona beer virus,” and from there it’s just a short step to the belief that the beer contains the virus.

And it’s all because people can’t handle homonyms if one or both meanings is emotionally-charged (or perceived to be; nowadays they’re the same).  They get over-attached to words and are utterly unable to distinguish the word from the thing.

The many abuses and irrationalities surrounding this confusion are the subject of Hayakawa’s Language in Thought and Action, It’s one of the most influential books I have ever read and one that everybody should have read before they finish middle school.

The fact that they have not read this book (or been exposed to the same ideas in other form) is evident from the pervasive confusion or conflation of alternate meanings for one sequence of sounds.  You can’t let a Chinese-American named Lee cover a football game (because of Robert E., get it?).   You cannot have a building named “Lynch,” even though that’s the name of the person who donated the land.

And you certainly cannot have a beer named for a virus.  It’s all a conspiracy to poison us with beer!

But seriously, why aren’t linguists out there on Fox or CNN, explaining that entirely different things with the same-sounding name do not intermix or influence each other?  This is magical thinking.

Why aren’t linguists openly denouncing the pervasive homonym contamination and inference that lead so many people away from the path of reason?  Is it because they’re securely tenured in the epicenters of political correctness, the universities?

It’s almost paradoxical.  On the one hand, we deal with homonyms constantly in conversation, with context providing meaning.  Consider the word set, with dozens of meanings.  How often do you have to ask which one is intended?

Deliberate ignorance of context is the basis of many puns and jokes, e.g., man collapses on golf course. Paramedics arrive and one asks, are you comfortable, sir?  Response, I make a living.  Or how about Henny Youngman’s classic “take my wife – please.”

On the other hand, language is employed in a broader social context.  If there’s perceived resemblance to any of a list of taboo words or personal names (which keeps growing), the homonym name-thing contamination kicks in.  Hence “corona beer virus.”

This may be a very widespread cognitive phenomenon, this failure to clearly differentiate between two distinctly different things with same-sounding names, this mental malleability that so readily colors one reality with another.

Or is it a failure of our educational system that keeps from the populace certain linguistic facts and principles, lest they become aware that they are being manipulated?   “Lynch” on a school had no connection to the atrocity that sounds the same.  But it feeds the liberal oppression narrative to dwell on such things and compel change in the real world..