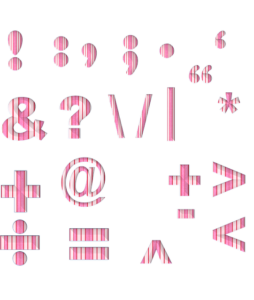 Written language contains many information signals beside letters and numbers. Here are a few.

A period is to let the writer know he has finished his thought and he should stop there if he will only take the hint. Art Linkletter, A Child’s Garden of Misinformation (1965)

A period signals anger or irritation?  Seriously?  You’ve got a million emoticons that send every human emotion precisely, and you choose to be offended by a little dot in which you have to work to find offensive meaning?   This is indeed, in the words of one commentator, “peak snowflakery.”  I’d say beyond peak snowflakery: imagine a snowflake shaped like a butterfly, only more delicate.

OK, let’s talk about it.

“Angry period” is not so much a new use as a new contextual interpretation.  The period will continue to demarcate various strings of written language. It signals that the string/utterance is over (for now).  That’s pretty important, because readers who encounter the period know that they must process and interpret everything before it (since the last period, if there is one) as a syntactic/semantic/pragmatic unit.  Within this general function, the period has many uses.

Nowadays, sentence fragments.  Common in colloquial writing.  But not formal.

It even has a new use as an indicator of pauses between highly emphasized words, e.g., “Oh. My. God!”.

Now it has a new social meaning in text messages: you come across as angry or irritated.  The operative verb is  “come across (as)” — that is, whatever you, the sender, intend,  I perceive it this way.  And it always turns out that you are the offender; this is the fundamental maxim of politically correct speech.

Assuming the inevitable spread of ideology to other punctuation marks (in a dictatorship of the proletariat, the state’s message must be everywhere – ubiquitous branding, you might say), let me get out ahead of the curve and examine the political implications of some of the other marks of punctuation.:

This one has multiple uses – separating sentences, separating series items that contain commas – so maybe it should be welcomed as gender-non-specific, fitting neatly into the multi-gender ideology, which has already extended to pronouns.  It’s a moot case, though, since very few writers use it.

Used to separate strings of many lengths and kinds – including parenthetic expressions — that’s what text-writers like about it – the perfect blend of tentative finality – but with more to come.  The dash is a strong divider but doesn’t advance the oppressor/victim agenda, so we’ll leave it alone.

This one is problematic, as liberals like to say.  It signals that the writer wants something from the reader.

What if the question, like” Where are you from?”, is perceived as offensive, as somehow an artifice of the power structure?

Did the speaker have the right to ask that?  Are there offensive implications that only the reader will perceive (as in language referred to as a “dog whistle,” a fictitious entity, except in the minds of the politically correct)?

Is the question itself somehow a micro-aggression?   (Woody Allen once said that English was full of anti-Semitism: “Jew eat yet?” “Jew see that movie?”)  We’ve got to wean ourselves off the question-mark – too intrusive.

Too many uses.  Who can keep track of them all?  Too much room for arbitrary, repressive punctuation rules.  Gotta go.

Like the period, it expresses emotion that could be considered a micro-aggression.  In the interests of offense-free speech, it has to go.

Like the hyphen…it can separate various kinds of word-sequences…and like the hyphen, it blends boundary with tentative finality…it sort of just trails off…so it’s a favorite among texters…and it should stay. ..

The one personality trait that comes through in young people’s communication is indecision.  That’s what’s responsible for the, like, ubiquity of like.  It’s also responsible for “uptalk.”  Now it’s invaded punctuation: sentences seem to end but don’t really…

My comments are just a start. Those who wold purge language of oppression can go through the whole list of punctuation marks in the above manner.  They should also look at Capital Letters.  How dare we suggest that one word is more important than another?

In this case, as everywhere in the world of the woke, it’s a matter of perceived intent over-riding actual intent.  The rules of intention and interpretation keep changing. One becomes reluctant to say anything. A cold silence of fear is creeping into our corporations; it’s already taken over academia.

Rules of grammar (technically, “rules of usage”) are now regarded as racist and oppressive. It’s only a matter of time till English spelling (admittedly inconsistent and confusing, the product of earlier eras in which it was even more so) is found repressive and patriarchal, and spelling rules are challenged and thrown out.  Imagine: armies of young people, purposefully ignorant of the conventions of written language, in charge of the world.  I can hardly wait.

Remember: You read it here first.

Will no credible authority speak up?

Again I ask: where are the high profile linguists – McWhorter, Lakoff, Chomsky, The Public Intellectual?  Haven’t they got a minute to go on TV and denounce the language crimes that create offense where there was none and thus help divide and destroy our society?

Given the silence of those who should not be silent as our society falls apart, in no small measure because of language crimes, writers are best advised to avoid the period in texts if it’s likely to be found offensive.  I’m all for social concord.

But angry-period-haters need a reality check.  If you want to express yourself credibly in practically any other written context, certainly including business/professional emails, you’d better learn how to use the period.  Period.